Birthright has arrived - well my advance copy has! 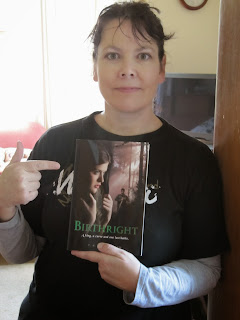 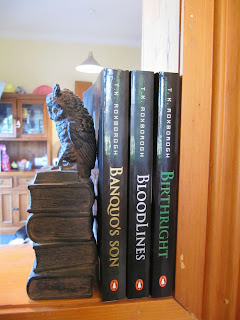 Boy, it's been a long gestation, this trilogy. I'm glad it's finally over and am thankful for the team at Penguin NZ for making the book so purty. (Though I don't because I've just walked up from the University. But, what a treat to find this in my letter box).


And, because it's been a long time between drinks, I thought I'd give you:
The story so far
The story begins in 1053, when Fleance is living with his adoptive parents and sister in the woods of northern England. Despite knowing who he is – the son of the murdered Thane of Lochaber – Fleance keeps his identity secret for fear that those who killed his father Banquo, and tried to kill him, are still seeking his life. He is in love with Rosie, the daughter of a wainwright, and is on the verge of asking for her hand in marriage when the ghost of his father appears. This apparition and the nightmares that have plagued him since he fled Scotland spur Fleance to action – he must go back to the land of his birth and try to find out why his father died. He rides north, leaving behind a broken-hearted Rosie and her furious father.

In Scotland, Fleance finds the answer he is seeking: it was the tyrant Macbeth who had Banquo murdered. In his quest for the truth, Fleance is reunited with his boyhood friend, Blair, saves the life of Duncan, nephew of King Malcolm, and is introduced to Duncan’s sisters, Rachel and Bree.
During the months of Fleance’s absence Rosie’s parents have moved back to Scotland and settled in Perth as innkeepers. Fleance’s identity is revealed, and since he believes his life is no longer in danger, he sets out to return to Rosie as promised. But on the way to Perth he is attacked by a hired assassin. Fleance is badly wounded and lost in the forest for days. By the time he reaches the inn, Rosie has returned to England, believing that Fleance has broken his promise.

Within a matter of months the ailing King Malcolm dies, and his brother, the mad, witchcraft-obsessed Donalbain, suffers a fatal blow to the head when he tries to kill Fleance. Duncan is crowned king, just as Scotland’s royal army prepares for battle against a rebel army.

Meanwhile, Rosie arrives at the castle with Fleance’s adoptive sister, Keavy. Rosie has been in England nursing Fleance’s adoptive mother through a fatal illness, and now Keavy is without a guardian. Fleance agrees to take care of her and promises that when the battle is over, he will find Rosie and they will be together.

During the battle, the king’s army learn that the rebels are supported by Norway and its king, who for a number of years has been disguised as Calum, an aide to Duncan’s father, Donalbain. This is not the only truth revealed on the battlefield: Magness, Fleance’s adoptive father, is the leader of the rebel army that has come against the crown. Before either of these men can be killed or captured, they escape. Though his army is victorious, the newly crowned Duncan is fatally wounded. Because Duncan has no heir, Fleance is next in line to the throne, and before the young king dies he bestows the crown and the hand of his sister Rachel to Fleance.

Fleance must make a decision: to go back to Rosie and a life of peace and happiness or to honour the dying wishes of his friend. The King of Scotland cannot marry the daughter of an innkeeper, and so Fleance chooses to put aside his own desires and follow the path of honour and duty, thus becoming King of Scotland.

Shaken by the rebellion, Fleance’s advisors insist that he marry Rachel to strengthen the royal line. He and Rachel enjoy a close relationship, but it is without the passion each of them has felt for another.
Shortly before their wedding, Rachel is kidnapped by Calum’s men and taken to Norway, where she is stripped of all her dignity. But when Calum needs her skills as a healer she is sent to the palace hospital to tend Norway’s soldiers wounded from battle.

In Scotland, Fleance is unable to discover what has happened to Rachel, and agrees to a suggestion that Blair and Rosie travel around the east of the kingdom in search of her. Meanwhile the rebel armies have gathered strength and Fleance must prepare for a second battle.

Once again the king’s army is victorious, and the rebel leader Magness is captured. As a traitor, Magness must be executed and, despite Keavy’s pleas for the life of their father, Fleance has him hanged.

Rosie and Blair discover that Rachel is being held in Norway, so Fleance travels in disguise to Calum’s realm. The only person in Scotland he tells of his plan is Preston, his loyal advisor. In Norway Fleance is captured, tortured and left to die. He is saved by Preston, who tricks Calum and dies in Fleance’s place. Escaping Calum’s stronghold, Fleance makes his way to Normandy and the court of William. There he finds Rachel, who had escaped Norway days before his arrival. The two are reunited and agree that they must marry.

Before Fleance can wed Rachel he decides he must free Rosie. He tells her that he no longer loves her and that their love was young and foolish. Angry and bereft, she returns the necklace he gave her for her birthday and curses him. Soon afterward, Rosie takes Blair’s hand in marriage.
Behind all these tumultuous events and always on the edges of the action, are the evil-hearted witches who first snagged Macbeth over a decade before

And, now, the intro to Book Three:

‘There are many stories, Sire, but nothing explains why some people take sick, why some get better, and some go mad and die . . .’

Scotland, 1055, and the kingdom is on the verge of collapse. There is rebellion in the south, a mysterious illness sweeps the land and some say that dark, supernatural powers are responsible.

Fleance, the young king, and his wife, Rachel, await the birth of their first child, but the queen is very ill and rumours fly about that the royal family is cursed. Fleance and Rachel must try to hold the realm together in the face of disease and treachery, both within and without the castle walls. Only a few loyal friends can be trusted, including the Thane of Lochaber and his wife, Rosie, whose very presence stirs up painful memories for Fleance.

Trouble is brewing – and not all who participate in the struggle will survive.

Posted by TK Roxborogh at 1:14 PM No comments: Links to this post