My new website is almost ready to meet the world

Go here to have a play with the links. Not everything's up but it's pretty fun.
Posted by TK Roxborogh at 7:00 PM No comments:

At the top of your blog, you will find the button 'next blog'. Have you clicked it? Do you know who follows next in the great list of blogs? I've just popped over to my neighbour to say hi. Why don't you too? Of course, as blogging goes, and it's a bit like travelling in the tardis, your neighbour changes so who knows who you will be shuffled with each time
Posted by TK Roxborogh at 6:06 PM No comments:

and the great reviews just keep coming in...

From Gordon Nicol of Abacus Books: am part way through Banquo, and am really enjoying the read…. I think it is a handsome production that Penguin have put together as well.
Got to the irrepressible Graham Beattie's blog

Not to mention the Face Book chatter about the book. There is now a very clear divide: Team Rosie vs Team Rachel.

Was in Queenstown last night for a speaking engagment for the National Reading Association Conference and a whole scene came to me as well as the beginning of Bloodlines. I've really been struggling with the start of Bloodlines and now I've nailed it. Thanks Diana Gabaldon, for the start of your An Echo in the Bone. Yusss.
Posted by TK Roxborogh at 4:08 PM No comments:

Penny's write up of the Banquo's Son launch 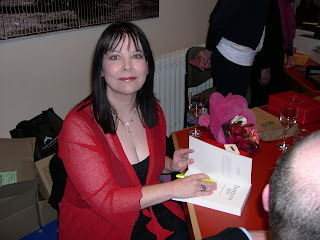 Well, a year and a half after reading the first draft of Banquo’s Son, the night of the launch finally arrived. About three hundred other guests and I made our individual ways to the Sir Clifford Skeggs Gallery, part of the municipal chambers of Dunedin’s Town Hall.

I was first wowed by the fact the sheer number of people Mrs Roxborogh knew to invite. But it became clear from how excited we are all we that the newly-born T. K. Roxborogh has a strong army of supporters as Banquo’s Son takes flight.
We were lucky enough to hear a bagpiper as most of the guests arrived, a clear reminder of the book’s Scottish setting.

Members of Project Macbeth also circulated the room, advertising their current production of a take on a twisted Macbeth, in which the man himself found Shakespeare’s play, portraying him as a tyrant – and he’s not happy about it! Guests saw a snippet of this play, in a short scene between Macbeth and Banquo – the latter is of course the father of Fleance, Roxborogh’s protagonist in her book.

With introductions by a staff member from Dunedin Public Libraries, we heard speeches from Vicki Marsdon, the publisher of young adult books released by Penguin Books. Vicki highlighted something all the Babes and I have felt: from the earliest reading of Banquo’s Son, we knew it had the ‘wow’ factor and were lining up to champion the epic novel from SFD to what’s out on the bookshelves of all good bookstores today!

Fleur Beale, a long-standing writing friend of Mrs. Roxborogh, was also in attendance and was the one to formally launch Banquo’s Son. She spoke in what would have been code to those not “in the know” – and her hints at something “terrible” happening have probably convinced most people to buy a copy as soon as possible. She may even have convinced some people to purchase a copy on the night of launch.
Mrs Roxborogh was certainly in high demand, taking a seat to sign her books as they were sold and remaining there, still in high demand for a large portion of the night.

When she did take to the microphone to give her own speech, directly after Fleur Beale’s ended, Mrs. Roxborogh was fittingly proud to produce yet another book of great quality.

But the launch was a night of celebration, and that included a little bit of public humiliation for that group known as “The Babes”, of which I am a member. We were called up by Mrs. Roxborogh during her speech, in the kind of voice that will make any pupil quiver if it comes from their teacher’s mouth. But instead of what might have been a detention, we were awarded our free, signed copies of the book and beautiful New Zealand pounamu necklaces, a gift given because of our contribution to Banquo’s Son.

Mrs. Roxborogh also referenced back to an incident just that day, when a group of The Babes stormed on her classroom, brandishing copies of the first fifty-seven pages of Bloodlines, the sequel that had been inked all over in red, we said simply, “We need to talk.”

And talk we will, as the sequel progresses. But the rest of the world will have to wait until 2010 for that!
Posted by TK Roxborogh at 12:55 PM 2 comments: 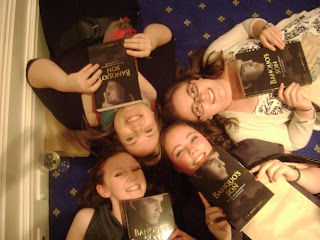 A full report to come, hopefully by one of the babes as I spent most of my time before and after speeches signing books. The photo above is of girls from my Y13 class last year.Below is the crowd. 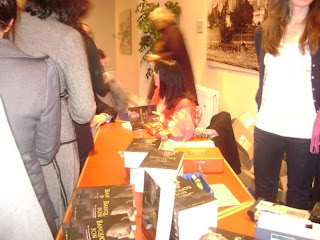 The skeggs gallery was packed with over 260 guest - at least 100 or them secondary school students from Columba College where I teach.

Fleur Beale launched the event. It was lovely. Look forward to Penny's detailed account - she'll do a better job than me
Posted by TK Roxborogh at 10:37 AM No comments:

The kitchen is tidy, the house is quiet: hubby and doggos napping. Eldest organising her study plan and youngest spending a day with the horses.

Though it is a beautiful spring day, my mate Fleance has sent me urgent txts, twitters, FaceBook messages and the occasional MSN. The tenent of these messages? Get back here now and help me sort out this mess. I've been standing in front of the Earls and Thanes for nearly two months and they want answers.

Here I come, good lad, with some solutions to your immediate problems. Unfortunately, I also bring a bag more of difficulties for you to face in the coming months.
Posted by TK Roxborogh at 2:01 PM 2 comments:

The books have arrived

oh so pretty. So nice to see them in the final form. Desire them peoples. Ask for them. Seek them out. They look damn good and, I'm told, are pretty amazingly written, so you should desire a copy.

1st of October, NZ and Oz. US and the rest of the world will have to wait.
Posted by TK Roxborogh at 7:03 PM 2 comments:

People keep asking: when is the film out? when will the book be published internationally? How much do I have to pay for the book?

Good questions.
Answers: film? Well, these things, seriously, take time. I have been involved with the film industry: if you have been given funding then one goes about filming the content but, it takes time because someone (ie who has money - ie production house) has to pick it up. As to the US Film rights, we have to tread carefully because the publishing rights come first....

International publication? Those in the know say that this book should not be 'pigeoned- holed' at any genre. That, there is the rub (ta - Will Shakespeare).

The interest we are getting from a wide range of houses is exciting and looks to mean serious competition for the 'priviledge' of publishing this trilogy.

In the short term, we enjoy the excitment of the impending launch of Banquo's Son here in NZ and OZ and look forward to later publications in other parts of the world.
Posted by TK Roxborogh at 6:25 PM No comments:

Pressure from the fans

So, quite a few people now have read Banquo's Son. And, the opinion is divided as to who should be the life partner for Fleance.

What is an author to do? Keep true to my story or be swayed by the people who have strong opinions?

Part of me is pleased that there is developing a Rosie vs Rachel situation - it means I've got it right in terms of these gals who both love Fleance with passion and devotion.

I think I will push on with my original dream because that's what I know is right and, perhaps, some people will be cross (but understand!)
Posted by TK Roxborogh at 6:25 PM 3 comments:

The finished look of the Home Page

If you double click on the photo, you will be able to have a better look at the image 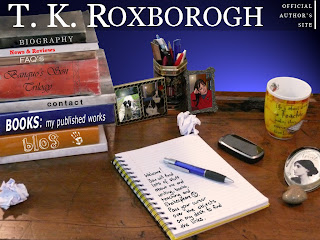