When you read this type of novel, are you irritated by the inclusion of the backstory and just want to get on with the present plot or do you enjoy reading them (provided they are exciting and mine are and will be)
Posted by TK Roxborogh at 8:42 AM 4 comments:

I will spend time showing you her kind and considerate and funny side - she's the life and soul of any party and makes Flea laugh - which is what he needs (and why he likes Duncan so much because Duncan is alwasy teasing him). I have always seen Rosie as stroppy and, yes, a bit indulged, but hey, she's an only child and hasn't had some of the tough things of life to deal with like Flea. This turn in events I think will be the making of her - trust me.
Posted by TK Roxborogh at 10:21 AM 4 comments: 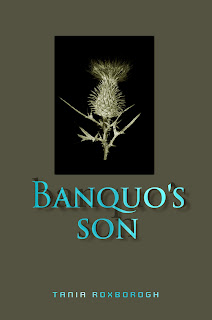 Here is a proposed (and very early idea) for the cover. The other (which is under copyrite) has a young bloke's face at the top and castle ruins at the bottom. I like the castle AND the thistle. Imogen has suggested this one be second edition.
Publication date is set for September 2009 and the publishers are Penguin NZ.
Posted by TK Roxborogh at 10:04 AM 1 comment: