snow - it's the same no matter what century 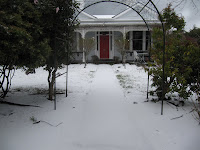 It's been snowing in Dunedin for a couple of days. Yesterday, after six days of being house bound due to poor health, I donned snow gear, put on special grips for my shoes, grabbed a ski pole and headed down into the valley to the supermarket. It was fun. Damn cold, but fun. As I made my way back up the hill with supplies and treats for a night in front of the fire, my mind went back to my story. I imagined Fleance, on his own, his horse following, making his way south to England in the snow. I began to ask questions: how would he do it without being discovered? Who would know where he was heading? Why would he be going to England? Of course, I know the reasons behind these questions but I can't tell you yet - you'll have to wait until April 2012. This is what I did discover as I tramped through the sludge and turned my head away from the blizzard: a dead baby will be pulled from the water; a rumour will say the king has gone to Ireland; the bishop will be involved; there will be crossing, double crossings and then more twists.

Oh, and you'll love Flea's new horse. - Don't worry ! Willow is still alive and kicking but just too old now to be a king's battle mount.

PS: I took this picture this morning. From the road looking toward the front of our 100 year old house
Posted by TK Roxborogh at 10:17 AM 2 comments:

an old malaise that still plagues even we commoners

In mediaeval times, one of the most common treatments for head pain was blood letting. The surgeon would figure out which of the humours were affecting the body and make an incision in that quarter, collect blood, study it (including smelling it) and make a diagnosis. Using the treatment was a regular session of bloodletting until the patient felt well.

Why did this work? It is thought that, most commonly because of poor diet and, yes! Stress, the patient suffered from hypertension - high blood pressure. Sometimes an infection or a cold could raise the blood pressure as well. By 'letting out blood' ie bloodloss, the blood pressure went down (just like in all the ER type tv programmes -;he's lost a lot of blood - his bp's dropping....!

So, bloodletting was a very common and, it seemed, usually 60% successful.

Why do I mention this bit of ancient medical trivia? Well, all my life (including two pregnancies) I've had very healthy blood pressure - even when I have a BMI of 44 so, after two weeks of struggling with flu like systems and a headache that just wouldn't go away, I got a check up.

My blood pressure was 145/120! My doctor is a very understated calm person but he was not happy. Go home and rest - now! Thankfully, it was only two days to the school holidays but he duly sent around the district nurse who has been checking it three times a day and I've have to take some pills which make me very sleepy.

After two days, it still hadn't come down and we figured out the problem - my teenagers treating mum like they always do - slave. Tonight there was a blood letting of sort when she stared the family around the table and told them in no uncertain terms that if they did not allow their mother complete bed rest as well as absence of typical teenage demands, I may end up in hospital.

But, I feel a lot like Rachel does in Birthright – it’s so frustrating doing nothing!!

Chipping away on my laptop in between snoozes and dvds though.
Posted by TK Roxborogh at 5:09 PM 4 comments:

I am thinking of making a list which outs we writers about our strange habits. I can't speak for my writery friends so I'll just let you in on a somewhat answer to the question I get asked often: how do you have time? or How do you do it all: teach, parent, run a household, be goddess...?

My usual quip is: I don't exercise - or dust- or garden.
But truthfully, I spend a lot of my time watching dvds and my favourite tv shows: not to be missed currently in our house: Shortland Street, Castle, Dr Who and, the news - until it gets too depressing.

Anyway, how do I do it response one:
It is currently 3:37am. I have been asleep for six hours after a week very ill from the flu and three days teaching. Why am I at my computer at this time? Because it's quiet! Everyone in the family is asleep. No one needs me. It's Saturday.

At 3:37am, a writer can write with out distraction. For me personally, there is a clarity of thought and deeper understanding of the human condition at this time which informs my writing. This is not the time that I write my action scenes (I need chaos around for that) but for those truly moving a character forward moments.

In about an hour, I will trundle off to bed happy in the knowledge that I've written 500 words and addressed a significant moment for my character.
Posted by TK Roxborogh at 3:33 AM 1 comment:

Macbeth and the tortured artist

Every so often I hear the cliche: tortured artist.
I also read every year from earnest students about Macbeth and his tortured soul, whether it be from my own classes or in the form of national examination essays.

While taking a much needed break from a particularly exciting but exhausting scene, I thought I might muse on these two ideas: tortured artist; tortured soul

Tortured soul
Macbeth was tortured in that what he wanted he suspected could only be gained by foul means but his desire for it was stronger than his acute understanding that if he tried to make it happen as he and his wife planned, then he was doomed: if the assassination/Could trammel up the consequence, and catch/With his surcease success; ...But in these cases
We still have judgment here;'

If by doing the deed [killing Duncan] I could also kill the consequences of such a horrific act then with his death I would have success but unfortunately, there ARE consequences in doing such a horrific deed: killing a king, a cousin, a guest, one who is loved by all. And on earth, that judgement is not just about what others might say but spiritually I run the risk of invoking God's wrath and who knows what HE might do to me?

Macbeth was FULLY aware of the possible aftermath of his intention to kill the king. As a footnote, I would argue that his wife, Lady Macbeth, was naive.

Our class has been watching the 80s docu-drama 'Helter Skelter' as background information to Polanski and his film version of Macbeth. We are reading it through the lens of the play.

Much discussion has been generated about motive and these are what the kids say:
some people are just bad
wanting something blinds you to the aftermath of getting it
Macbeth was fully aware of the consequences but such was his desire for the throne, he was prepared to face those consequences.


I first read 'Macbeth' when I was sixteen. I saw a performance of it at the Court Theatre in Christchurch (I was surprised that at the interval I found my English teacher in tears in the bathroom. She tried to fob us off and say that she was having problems with her contacts.) Later, just before our exams, we all watched the Polanski film version. Then, I was appalled and covered my eyes.

I have taught the play almost every year I have been teaching (I've been in the classroom since 1989). I've written a couple of plays and text books on the play. Sometimes I show the film and I still cover my eyes. Apart from Polanski's portrayal of Ross, I think he did a great job. So far, no other film maker has matched his interpretation.

But, more importantly for me personally, I have written the sequel in novel form. And, in doing so, I have had to read and research and it has brought me to a fresh reflection on the character of Macbeth. That and presenting the text to astute 21st Century teens who have read my novels. And who have witness horrors via the media that I did not when I was their age.

Just realised that I have overwritten the quota by which people read blob posts. I shall deal with tortured artist next time.

And if you have got this far: just a heads up that some of the words I wanted to use I could not spell and my new computer is not as friendly as my old one so I did not say some things I wanted to say.

Posted by TK Roxborogh at 3:03 AM No comments:

When I read magazines which have photos of people's houses, I always look at their bookshelves. Bookshelf content says a lot about the interests of the occupant. Also, one hopes to spot a copy of one's own work. Today I recieved a lovely email from the amazing Vanda Symon who envyingly has finished the manuscript of her latest so was able to indulge by reading Home magazine (Feb/March edition). Unfortunately she did not find her books featured but she sent me this photo: 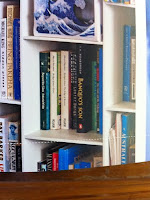