This review appeared on Beattie's Book Blog this morning.

“Birthright”, by T. K. Roxborogh (Penguin NZ) is the final in Tania Roxborogh’s Shakespeare inspired Banquo’s Son Trilogy, which tells the story of Fleance, son of Banquo from Macbeth. In Birthright, Fleance is the now beleaguered king of Scotland, fighting to save his crown, his people, his family, and his love. It is a fitting conclusion to an excellent series and should leave all who have followed this story through feeling very satisfied.

The book is told from a variety of points of view, including Fleance (our hero), Rosie (his great love), Rachel (his queen), Robert Graham (his enemy), Bree (his disgruntled young sister-in-law) and the three witches (who link it strongly to the story of Macbeth.) In short, well written sections, each narrator helps unfold a tale of deceit, intrigue, war and love, to bring about a very satisfying immersion into the world of medieval Scotland.

The research is seamless and never gets in the way of the story, while the tone and multiple voices all feel very authentic and believable. There is a cleanness to the writing that allows emotions to rise to the surface and a frankness that makes it feel very real. People need to slip off for a pee in the story, or stink of toil and war. It doesn’t gloss over the trials of childbirth either, or the horror and waste of lives brought about by the power plays of the ruling class. Yet it’s never so gory or disgusting that it distracts, merely adds an extra narrative dimension that makes it a more memorable and fully immersed experience for the reader.

This is a world class book that deserves wide readership, both by its intended YA audience and for any adult who likes a well written and moving historical novel.


About the reviewer:
Mandy Hager  has written eight novels, as well as short stories, scripts, and non-fiction resources for young people. She won the Esther Glen Award for Fiction for her novel Smashed and Best Young Adult Book in the 2010 NZ Post Book Awards for The Crossing, the first book in the popular ‘Blood of the Lamb’ trilogy. Her 2012 novel, The Nature of Ash, was a finalist in the 2013 New Zealand Post Children’s Book Awards in the Young Adult Fiction category, and won the LIANZA Young Adult Fiction award. Her latest book, Dear Vincent (2013), about painting, suicide and Vincent Van Gogh, was written with the support of the 2012 Beatson Fellowship.

Mandy has been awarded the Katherine Mansfield Menton Fellowship for 2014 and she is one of the best writers for YA I'd read. I urge you to read her work if you haven't already. I put her in the same category as John Green. Seriously. Smashed and Dear Vincent grabbed me, knocked me around and left me changed forever.


Posted by TK Roxborogh at 6:09 AM No comments:

Last night, we launched Birthright officially out into the world.

Here is the evidence:


You can watch the presentations here (Kay Mercer of Dunedin Public Libraries introducing me and then reading a letter from my publisher, Penguin. And then you can go here to listen to my daughter Mackenna launch the book and my response. I include the text of my speech below as well:

When I was at primary school, I remember watching a British children's TV series about an invalided girl who was confined to her bed. She could only see the world outside through her window.  However, her mother gave her a sketching set and that's when the trouble began: what she drew came into existence the next day: a lighthouse, a boy in that lighthouse, rocks which later became angry rocks with eyes and the ability to move and hunt. I also loved the illustrated childrens' book, Harold and the Magic Crayon: a wordless story about a curious four year old boy, who with his purple crayon, created a world of his own simply by drawing it.

Back then, I was fascinated by the idea that one could have power to make things happen even though one might be powerless in other ways. As a child who was often at a place of sadness and fear, the possibility of being able to create a better, happier world was as strong a desire as perhaps those of you who wished that you could fly.

The television programme and the book were also cautionary tales: and relevant today because the warning, careful what you wish for or careful what you say and think.... it might just come true, is, in some respects the blessing and curse of being a writer.

When I woke that morning way back in 2008 from a dream of a young boy hunting a deer in the forest, knowing that he was Banquo's Son and wondering where he'd been for ten years, I had no idea how big a story it was to become, how difficult it was going to be to write and how hard I and my family would find the road on which we had to travel for the next six years.

It has taken that long: from first inkling of an epic tale to the launch of this, the third and final book.

Banquo's Son was banged out most of one summer; Bloodlines took a year to write but Birthright has been a more reluctant issue: when I started it, I thought I knew what the characters would say and do and think but, who am I? I'm really just a mug who has all these people rattling around in my head trying to sort out their problems. And they were the big problems too: the ones we ask ourselves during those dark sleepless nights when we feel most alone; most isolated; most afraid. Questions like: why do bad things keep happening to me? Why should I be the one who has to carry the load? What's wrong with wanting to pull the duvet over my head and stay in bed? And, probably the toughest and most honest question of all: If God is all mighty and loving, where the bloody hell is he?

It felt, a lot of the time, that Fleance, Rachel, Rosie and, later, Bree, were looking to me to help them find the answers to these questions. All I could do, I confess, is think up the most awful situations to put them in and watch them deal with it - I think it's called tough love. It's what we writers do. Perhaps we are a little like the Boss in Katherine's The Fly or as Glouster says bitterly in King Lear: 'As flies to wanton boys are we to the gods; they kill us for their sport.'

But, I am also a person of hope. And I want happy endings. You can't appreciate a happy ending, I think, if you haven't suffered the slings and arrows of outrageous fortune first. So, I apologise in advance for what you are about to experience in the reading of Birthright but I hope that, like me, you too will be left with a few tears among the smiles as you turn the last page.

Before I shut up and sit down, I want to publically acknowledge some people - many of whom are in the author's acknowledgment - the part that only other writers read:
I admit I'm not a bad storyteller but I could not have produced this without my publisher Penguin and my wonderful editor Katie Howarth and her team of intrepid editors and proof-readers. I spent so long in my head with this story and I had so many false starts that I did lose my way a bit. Katie, patient and astute, drew me back onto the straight and narrow - there will not be horses lost or misplaced in this book, I can guarantee you. I am so fortunate to have had Katie helping me these past few years and she should also be credited with how beautiful the story and the novel turned out. It's so purty!

This book is dedicated to the memory of Chloe Anson - a remarkable young woman and a talented writer who I met in 2006 and whose company I enjoyed for a number of years as she made her way up the secondary school. I am so glad I got to tell her how the trilogy ends. I want her parents and family to know that this is my way of keeping alive all that Chloe meant to me and I hope they will take some comfort in this, my meagre offering to honour her.

I also wish to publically thank and honour my husband Phillip who has (reluctantly I'm sure at times) stood steadfastly beside me and often behind me holding me up. Together we have navigated this tumultuous time of parenting teenagers, managing careers, studying at university and living with me, a writer who spends as much time in other places inside my head as I do in the real world. As much as I had a crush on Fleance, Phillip, he doesn't hold a candle to you.

My daughters, Mackenna and Brianna, have watched their mother battle with those questions I mentioned earlier - both in the writing of the books but also in my own life. But, like my main characters, they possess a indomitable spirit and absolutely goodness that can not be extinguished by the cruel and incomprehensible behaviour of others. I'm so proud of you two.

I have put away the purple crayon and I promise I won't get out the sketch pad for a while although how long I can hold at bay the other stories and characters who wait in the wings, I can not say.

Thank you to Kay Mercer and the Dunedin Public Libraries, our host and thanks also to UBS for always supporting local and NZ writers. I am glad you all could join me tonight as I kick - I mean - launch this final chapter of Flea's story into the big wide world.

Posted by TK Roxborogh at 5:42 PM No comments:

Birthright picked third in list of top 50 books for children and young adults, 2013 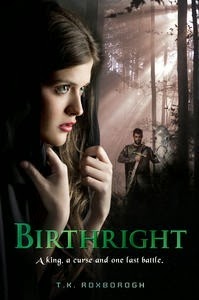 THIRD Faithful to the spirit of Shakespeare, BIRTHRIGHT (Puffin, $35)concludes TK Roxborogh’s Banquo’s Son trilogy of life in Scotland following the murder of Macbeth. Fleance’s Queen Rachel, suffering from severe pregnancy sickness, insists on ministering to those struck down by a disease conjured up by the same weird sisters who foretold Macbeth’s demise. The resolution of the love triangle involving “Flea”, his queen and his childhood sweetheart Rosie makes for a satisfying conclusion to the Dunedin author’s magnificent obsession.

I like this all being described as my 'magnificent obsession'. Read the list here
Posted by TK Roxborogh at 1:31 PM No comments: