How much editorial say does the editor have?

People interested in the writing process and esp the relationship between writer and editor, often ask how much say the editor has in my work and how much power I have to control what goes into the final book.

The truth is, if a writer has a great editor (and I have been fortunate to have had stunning editors for almost every single book), then it really is up to the writer to trust the wisdom and skill of that editor. I think of it very similar to doctor/patient relationship or even your relationship with your hairdresser: there’s a bit of getting to know how each other ticks (which takes time), personality match, interest match, communication – going both ways.

With Katie (my editor/publisher), I rarely, rarely ‘reject’ her suggestions. Sometimes I’ve metaphorically put my hands my hips and gone ‘no, you can’t take that away from me!’ (only to, in almost all cases, gone and deleted it anyway. Or, I might ring (as I did a few days ago) and say (in a weedling pleading voice) ‘Can’t I please keep that bit. It DOES develop the character of Cawdor and you DID say you liked him..?’ Katie said I could keep it if I felt strongly about it but in the end I didn’t because she was right: it doesn’t add anything to the momentum of the story or the development of characters that we’ve not already realised in action.

Below are a few of her comments from the last lot of edits which will give readers a taste of some of the dialogue between writer and editor. I hope she doesn’t mind sharing our ‘conversations’. The first one made me laugh out loud. She was right, as always

1) I really think that the whole need to pee situation makes Charissa seem like a ninny. Even though she is sitting by a sick person’s bedside, she must know that getting up to go to the loo is unlikely to take long enough for Morag to deteriorate significantly. I also think the whole Charissa needs to pee idea seems a bit like an inappropriate bit of comedy in what is a very serious situation. Would urge you to leave the poor character’s bladder out of this particular instance!

2) Medieval wooden balls have been dug out of the Thames, so they might have had them in 11th C Scotland. It may also have been a spinning top that flew out of control. [I wrote ‘wooden thing’ ]

3) I think it’s stronger if you finish here. [then, she deletes a couple of pages!]

4) This is a very strong way to end the chapter. The scene with Margaret does just make it dribble away – sorry to describe it like that. The conversation between Fleance and the dowager explores themes that characters’ actions prove and as such it is exposition, not story. I feel like the ‘Get on with it’ scene in Monty Python’s Holy Grail here . . . but get on with it! [again: delete/delete/delete. When we talked about it later, she said: I think it's pretty common to need to write in the ideas behind a book before taking them out. Like you need to be able to say before you can say it without saying it ... if you sort of know what I mean!]

5) There is no later mention of the bishop travelling with them, so I’ve taken him out and shuffled your dining plan! [This one I rejected – sorry Katie – but went back and made sure that we know the bishop is with the party as well (how else was he going to get to Scone before them all when we last saw him at Forres?)

6) Not clear what she is doing. [one of those moments when, as a writer, it’s damn difficult to put into words the action. What she was doing was systematically pushing the cuticles back on each of her fingers – like a stroking, comforting action. Meeeh. Didn’t work. I deleted it.

7) Watch out for cliché – just say black unless you can think of a more original way of putting it. [duh – raven hair – blerk! Really, Tania?]

8) I think this is the more useful argument for Bree. She doesn’t need to know that Graham wants to wipe out the family . . . She would see this an important bargaining chip. [I didn’t agree with Katie’s suggested rewrite but she was correct that it needed work. I’ve left that bit highlighted to go back to once I’ve mulled it over a bit.]

10) Give a little more description of this. How are they so well hidden? Can Rosie see how many men? How many tents? [hmm, good point. How DO you hide an army?]

11) I quite like the Thane of Cawdor and I don’t think he should vanish, he’s quite interesting. [I do too and I like him that he doesn't really like Fleance that much but is loyal because that is the proper thing to do. I wonder if they will become friends. I kind of see their relationship like that between Bones and Spock]

12) Why only one horse? Don’t understand. [Glad she spotted this. In Bloodlines, there was a continuity error over a couple of horses and I’m not going to make that mistake again]

I trust my hairdresser and I trust my doctor. I even trust my mechanic. I trust that they are skilled and have my best interests as their motivation (each has proven this fact to me over and over). They are not perfect and I do not blindly accept their advice but I give weight to what they say. It is the same attitude I have of my editor. As well as a huge amount of respect.

Birthright in the finishing room

Well, hello. Long time between posts. Have been busy doing the boring stuff readers probably don't really want to know about: know you, the working parts showing/mic too low, camera man spotted in the mirror accidentally type of stuff.

This is what I stare at currently. Double click on the photos to get a really close look-see: 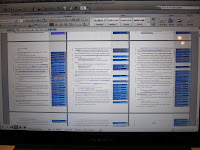 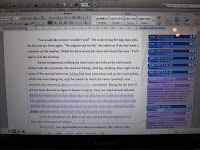 And there are pages and pages and pages of it. I need to read/check/agree or disagree with the suggestions/corrections/changes my publisher has made (mostly agree) and then address the comments (like the brussel sprouts or cooked cauliflower on my plate), I leave these till last because that's the hard stuff.

This is how I have been (and will be) spending my school holidays: the last touches to the final novel before it heads off to the line editor to make sure all the gaps are where they should be and no gaps where there shouldn't be.

This is NOT the creative phrase and is why I am so pleased to be part of an established publishing house. I'm the talent (to continue with the movie metaphor) but it's everyone else who makes the final product fantastic.

Creatively, I'm nibbling away at some new projects, writing a bit of poetry, running the youngest out to the horse farm, teaching my lovely students and getting myself healthy.