Count down to international release of Banquo's Son

In less than 20 days, Fleance and his adventures will become available to readers in the UK and the US. In anticipation, my publisher Thomas & Mercer are offering a Good Reads giveaway

It's been very satisfying having the chance to tweak the books but also interesting to see how much I have 'grown' (read: improved) as a writer.

When the advance copies arrived (all the way from Seattle, home of 'Grey's Anatomy'), it felt for me like they were tangible evidence that my life had shifted back onto the road of writer I had left behind to become a teacher. (Don't get me wrong - I have adored my career as a teacher. Students energise me!) 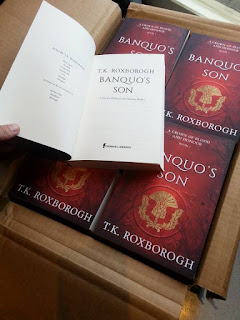 The other thing I recognised as I held one of the books is that it was a symbol of so many joys and tears and disappointments and jubilations since September 2008 when I woke from the dream which began Banquo's Son. The book represents the unworded story of faithful friends and staunch supporters of the potential of the narrative and its characters as well as the writer (me who penned it). In particular, I would like to acknowledge Vicki Marsdon, who first got excited about the story and Josh Getzler who became my wonderful agent, as the cheerleaders who drove me the book toward a world wide audience.

It takes huge commitment and persistence to be a writer or to do writing (the more active phrase). When you look at these books, you see pretty and new and, hopefully, when you open to read, you won't see the working parts because of the incredible skill of the editors, my agent, my faithful gaggle of 'babes', my family - all who helped me knock this book into touch. To them: Tēnā koutou, tēnā koutou, tēnā koutou katoa (thank you, thank you. thank you, all).

When I look at this book, I can't avoid seeing the shadow of a small stone of dried grief that sits to the side of the whole writing of the trilogy because I continued to write Fleance's story through very very hard times - battling with a close family member's ill mental health as a result of inexplicably bad behaviour of a few in position of power and the repercussions to me personally of standing up to injustice. We all got through it and the years of suffering and, like my characters (who had it much worse), we became better people: wiser, stronger, and, for me, a deeper faith in God.

So I like happy endings and there are happy endings to this as well. The family member is healthy and flourishing, as am I. The books are set to reach the world. Let this post be a lesson/reminder/encouragement - never lose hope; never give up. Langston Hughes says it better: 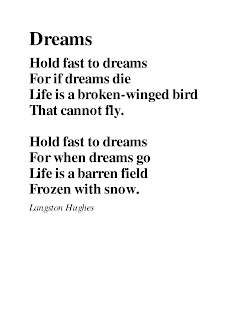 Posted by TK Roxborogh at 9:31 AM No comments: