Actually, they're not tarts: they're two of my very dearest friends. Firstly, Jo, intrepid photographer of everything God created was kind enough to come over and photograph my writing space (the charger for the camera disappeared down the back of a cabinet). 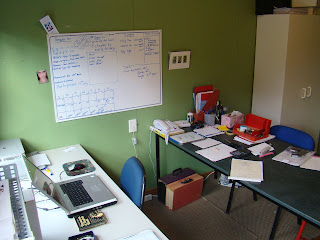 I've just been doing the end of the year accounts (to see, yet again, how I've spent far too much of my royalties on books and research but at least I get a refund!). On the long table is where I do the hand written stuff: the reading over of the manuscript, making notes, agreeing or disagreeing with the publisher. To the far right of the table you'll see a small pile of video tapes - this is school stuff (yes, it IS the holidays but I promised the boss I'd do some work for her.)There's also an incredibly useful resource: A historical atlas of Scotland - where to look when you wanna know it your main man is going to ride through a forest in the winter of 1054.

Out of the picture, on the far right, is a wall lined with shelves. These house all my reference/writing books, a large treasure box full of treasures, one dumbbell (pink), copies of my books and various other things I've taken off the desks to give you the impression I'm a tidy person.

The white board is a critical part of my writing life: I write goals for myself, reminders and deadlines. I feel, by putting up a list of books in incubation, I might just give them life one day. Here's a photo of the whiteboard at the College of Education when I was the Children's Writer in Residence 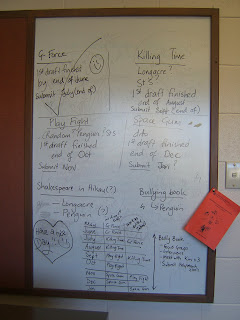 It's pleasing to see Space Gum and Bully Book have both been published. G-Force has been rejected by everyone and the other three are the aforementioned in waiting.

However, I love this photo because it's quite symbolic of my writing topic at the moment. 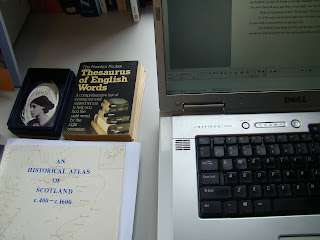 On the screen is the prologue to Blood Lines; that little book gets a special mention in the acknowledgements of Banquo's Son - out of print Thesaurus; and the paper weight from my dear friend Gillian. It's a portrait of Virginia Woolf and the saying: A woman must have money and a room of her own if she is to write fiction.

But, finally, this is what I look out on (if I'm not sitting at the dining room table like now) 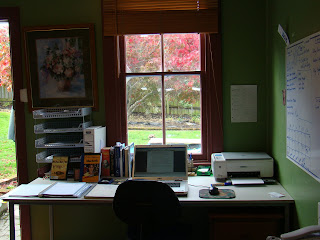 The other gift is from the domestic goddess herself, Vanda Symon She sent me a sisterhood award 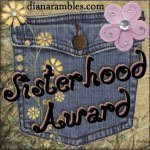 Thanks Vanda. It's nice to have a friend on the outside to recognise that this 'being a writer thing' is not necessarily something which comes easily or without sacrifice.
As with these awards there are a few simple rules:
1. Put the logo on your blog or post.
2. Nominate up to 10 blogs which show great attitude and/or gratitude!
3. Be sure to link to your nominees within your post.
4. Let them know that they have received this award by commenting on their blog.
5. Remember to link to the person from whom you received your award.
I must (and it's not hard to do), nominate others for this award.
Firstly, to Vanda Symon (by the way, click on her name and go to her webpage) because she's generous, patient, puts the needs of her family before her own and is bringing up two very special boys (whom she delights in). Not only this, she gives of herself for her community: the boys' school, NZSA the Otago community with her work on Radio, the telly, and a wide variety of writery and not so writery friends. And, she still manages to smile and laugh (and sometimes cry) and have coffee with me every now and then. However, for me, it's her faith in me - that she actually still loves me despite all the momentous cocks up I spring upon the world.

Another woman I'd like to give this award to is Jeannie McLean Jeannie mentored me through many years as I worked hard to rise to the top of my education field. She cheered me on and was sympathetic to my many knock backs. In the same way, I believe in Jeannie as a writer and she deserves this award for persisting even when the rejection letters arrive. Like Vanda, Jeannie is a crime writer but for YA and they are fab stories. She has a tight, energetic, no fuss style and the kids love her books.

The last woman (for now - I can think of four others off the top of me head but I've been working on this post for an hour) is Fifi Colston Years ago, when I was struggling with PND and crying, pooing babies and all I wanted to do was be slim again and wear nice clothes (or at least one shirt without baby puke on it) and go back into the classroom where it was much safer, Fifi uplifted me with her hilarious poems in the Next magazine. Never for one moment back then when I was laughing through the tears, could I imagine a time would come and Fifi and I would be friends. Like all the other women nominated, we have felt the sting of rejection for our talent. And, like us all, we're darn fine writers.

I must go as the the first of the four male guests from the National Youth Choir has entered the kitchen to cook scrambled eggs for everyone - their mummies would be pleased. Such georgeous young fellas. One is sooo handsome, I'm gonna take a photo and send it to the publisher as a potential face for the cover of Banquo's Son.
Posted by TK Roxborogh at 6:46 AM

You've got lovely Autumn colours out your window at the moment. See, if it was me, I'd stare at them all day and get nothing done.

I'm so thrilled you called me a tart!

Thank you Tania. You are too too generous with your very kind words and I treasure them.